I don’t even know who I am anymore.

It all started with about a hundred of those little tiny raisin boxes floating around my son’s snack basket (he’s been a raisin fiend for the past month), and shifted one afternoon, during a week off from work. I sat, eating one of my cinnamon raisin bagels, watching people entrust complete strangers their life saving to buy a house they hadn’t even seen yet.

Around my thoughts of “I really need to finish that library book.” And “Why on earth did I check out two books?” while watching this couple, small kids in tow, almost die on screen at the first reveal of their now new home, signed and sealed (but not delivered, because thankfully, the house will also get a total makeover before they get the keys).

My thoughts went to muffins.

But I can’t just do raisins, there has to be more…

With brown sugar on top.

“But, remember? You don’t bake!” I had to remind that craving now growing deep inside.

Mm, no, I don’t, not really, but I did make all that bread a few weeks back. It was definitely a hit. He just love raisins right now, and he’s always nabbing bites of my bagels when he’s around and I’m eating.

And so it was planned…

Early Sunday morning, clearly not full from the forever food Thanksgiving provides, I was up and at ‘em, in the kitchen, soaking raisins.

During this 10-minute soaking in boiling water, I realized, I didn’t have a muffin tin anymore. Well, I DO, but it’s that Pampered Chef mini-tin with like 100 mini muffins.

I was going to be forever pouring into those teeny, tiny little tin divets, and then sprinkling the brown sugar-cinnamon topping over them. When you have a nearly 4-year old, and it’s the last day before you return to work?

You don’t have forever.

A-ha! I had a mini-loaf silicone pan from one of those Tastefully Simple parties I got roped into attending. Half a muffin is about the size each loaf works out to be, and it was perfect.

Adjusting my cook time for the pan difference, after it was all said and done, I had cinnamon and raisin mini bread loaves. NOT muffins.

The recipe, courtesy of Baked by an Introvert: 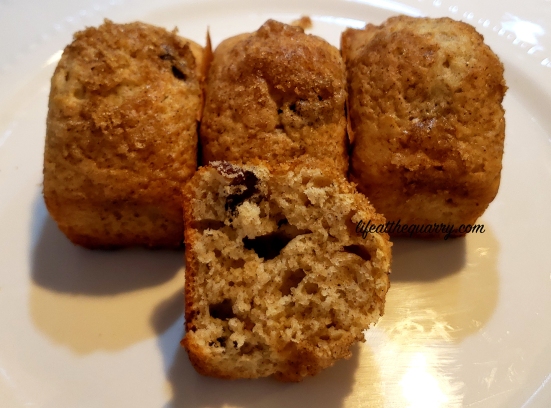 Note: If you’re using a silicone pan like I did, 15 minutes did the trick. However, do the toothpick test! If it comes out clean? You’re done!

Pro-tip: You can swap out up to 1/3-cup of flour with protein powder and create a tasty muscle treat!