It all started with a piece of blue sea glass.

Blue and purple are colors you don’t typically come across on the beach. It’s always green and brown. On several occasions, white.

Then the odd, almost translucent rock that my 17-month old picked up with an excited “Rock!”

It had been exactly one year since I had last been to this beach. The last time, he was just five months old, and spent the hour we were there, sitting under our umbrella in his bumbo, his chunky baby toes in the sand, watching his surroundings curiously as I pointed out things. We had the beach to ourselves that morning. That’s what happens when your mom is an early bird. We are at the beach before everyone else is even starting to pack for their beach day.

Last year, it had only been a few short months that I had been back to work when his daycare closed for its summer vacation week. Because of that, I was unable to take the time off to be with him. It hurt, and it sucker.

This year, I was able to get the time off. The weathermen promised a full week of sun and warm. I knew one place I wanted to take my curious and busy child: the beach. And quickly, it became Beach Week.

But it also became so much more. Every morning, I packed us up, and we headed out. Every morning, we spent an hour, or a little more, at my favorite local beach. We explored, we adventured. We gathered. 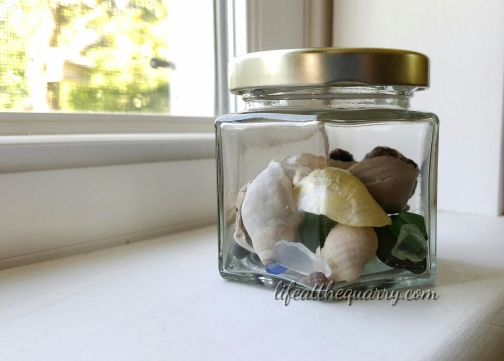 Every day I came home with a few more mementos to tuck inside a small glass jar.

Pieces of the week I got to spend with my son, completely uninterrupted. No interference from work. No commitments. Nothing. Except my son and I.

I can’t fully put into words what this week, and being able to have this week, means to me.

What it means to my mental health. My anxiety. The existing anxiety, and that postpartum anxiety that leaves me with that driving want to put just the two of us in a bubble. That anxiety that makes it hard to even share him with my own family. That same anxiety that has made it sometimes near impossible to make conversations with people I’ve known my entire life. That anxiety, that even 17-months later, I sometimes struggle with.

It’s been especially hard over the past few months, because our coffee shop shut down (read the post about our little shop here). It became a casualty of Small Town USA and road construction. So, as the result, I have lost my one thing I used to decompress from all of the build up of the world outside our door.

Looking at that glass of our collected things on the mantle over the television, it brings me a sense of calm. The week has given me something back that had sort of, lost its way over the past several weeks. It has righted my ship, and has set me on a course of things that can become our new “coffee shop”. My safe place to decompress.

It’s also shown me the importance of making sure I do get my self-care in. For not just the sake of my mental health, but because my son and my family deserve to have the best me that I can be. And I can’t give them that if I’m not making sure that I take care of myself.