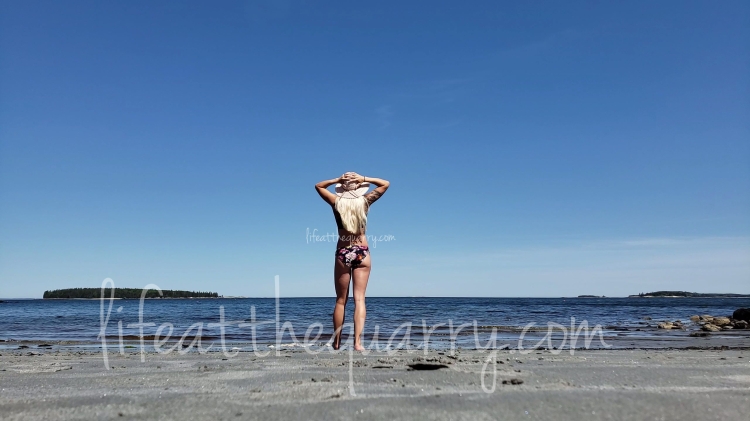 Until 3 years ago, this is what my beach life looked like.

This isn’t a metaphor for anything. No connection to my infertility journey.This is my anxiety convincing me that I needed to be off the beach any time I went, before everyone else showed up – or else…

I was born and raised on the coast, an arms-length away from where the ocean tickles the shoreline. I can’t say that I’d feel more at home anywhere else.

I used to think that I went so early in the morning to beat the crowds. Sit in quiet. Soak in the sounds of nature.

Most of the beaches I frequented were off the beaten path. Ones only locals knew about. No crowds to beat.

I’d be clearing out when people would be starting to trek out onto the sand, setting up for a day of relaxing, or fun.

I remember my first trip trip to the beach with my son. It was early in the morning, I’d taken a mid-week day off of work to take him to the beach. Barely 5 months old, I set him up on a blanket, and pitched up our umbrella.

Before I could sit down, the wind picked that umbrella up, then started carrying it down the beach. I looked down at my son, knowing I couldn’t leave him. Should I pick him up and run with him for the umbrella? Or do I just let it go?

I was alone on the beach. There was no help.

Thankfully, at that time, a man and his dog had been coming off a trailhead, right where the umbrella was headed. He kindly brought it over, and helped stake it back in.

I only stayed another 10 minutes. It was also the only time that summer we went to the beach.

The following year, it all hit me. And it happened on a day when my son wanted to go to the beach – in the afternoon.

I could say no. Tell him the tide was in, there wouldn’t be any beach to play on.

In reality, my head was screaming at me: People. People everywhere. They’d want to talk. Small talk. Questions.

People I knew could be there and they’d most definitely want to chat.

It wasn’t quiet I’d wanted before. No trying to beat the crowds.

It was my anxiety, toying with me, convincing me that in order to protect myself, I needed to go early and leave early. I needed to steer clear of people.

People talked to you. Asked questions. I’d have to socialize.

It wasn’t like my morbid anxiety, where the answer to the “What’s the worse that could happen?” is always “I, my son, my husband, insert other person who means a lot to me – could DIE.”

The worse case scenario would be, I’d have to embarrassingly fumble through conversations, because I’d forgotten the basics of conversation in the midst of my postpartum anxiety – making my social anxiety 100 times WORSE.

We ended up near a family vacationing from the next state over. They had twins.

The daughter, I’d learn, was a Mother’s Helper (in training). She took quickly to my son, asking if she could play with him.

I think the mother sensed my hesitancy for conversation, and somehow I felt the same from her.

As we DID begin to talk, I realized we were similar in that sense. I was in envy of her courage to admit it, not far into our conversation.

We shared similar stories of infertility. Their twins coming from a final, & successful round of IVF.

Before the afternoon ended & they needed to get back to where they were staying, our beach sites had become combined.

We watched the kids play, shared our snacks, talked.

I realized we had been there for over two hours.

I’m a believer of fate. Life giving you a hand to play, but you choose how those cards are played. That day, I held my breath as a lay down that hand, and played it for my son. Something he wanted to do.

And fate set us next to this family.

To show me that I can do it. It is okay.

That the worst that could happen is: I fumble through some small talk, then go separate ways.

We said our goodbyes to that family as they finished packing up their stuff, and while I know my son will never remember them, I know I will.

We still go to the beach early most days, but if it is a weekday, after work, I find my heart a lot calmer, and my brain a lot quieter when we make a trip in the afternoon.

I’ve even taken up yoga at the beach, which has certainly been a conversation starter.

This beach is far from empty. To my left, families, and friends are enjoying the warmth that has finally decided to arrive here. And as I stood there, listening to all of the sounds, I realized just how okay I am.